Travel Feature: Tuscany in a Camper. 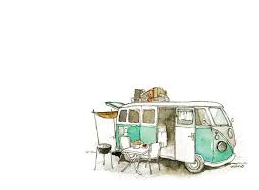 I’m in Tuscany. But other than the fact that I managed to scrump three figs, and take another four off of an old lady in the street, I shall not bang on about the food.

What is infinitely more interesting is travelling in a camper van. It’s on loan from the in-laws. So we’re in a campsite that is brim-full with Dutch and German campers. We could be in Nijmegen, except that I can’t see shit for olive trees.

I promised I wouldn’t bang on about food. Except this one other thing: here I am serving up some ravioli with pesto. Frowned upon, I’m sure, by anybody from Liguria (and wherever the hell ravioli is from). But anyhow, that’s what I’m doing. And I’m doing it in the confines of the camper van’s cooking area. Which is too small. So inevitably I turn and knock the saucepan against one of those crappy cupboards with the pop out handles. The ravioli goes everywhere (it has nowhere else to go). And I spend the next 20 minutes trying to clean up my mess with a toothpick.

Trying to ignore the bits I can’t get to, I go to leave the camper. In the process I knock the tap (placed at perfect elbow height as you try to squeeze your way out of the kitchen). Off it goes. The whole place gets soaked and my girlfriend chucks me one of those looks.

I hold my arms out, palms facing heaven.

‘This van’s just too small for me.’

We sit down to eat the remnants of the pasta that I managed to salvage from the riveted draining board. We’re on one of those rickety fold away tables with one leg. We being my girlfriend, daughter and I. We’re facing in the direction of travel. Except we are of course stationery. The curtains are drawn, held together by a slither of Velcro, to stop the last bit of sun from ruining our day.

‘Tomorrow,’ I say, during my second and penultimate mouthful of pasta, ‘…barbecue.’ It was the first thing any of us had said all meal. I recalled the rusty old grill in the back. It could barely stand on it’s own feet but the congealed ash from many a summer seemed to just about hold it together.

There’s a hello. A shadow approaches the van. It was a man – our neighbour with the pristine bedouin tent and the posh bicycles.

‘Do you have a bread knife?’

When you’re in a camper, people expect you to have stuff. Bottle openers. Matches. Awnings. I had a bed that was so short that I was forced to spoon the side door-handle. But no bread knife to my knowledge.

We sent him away. The three of us watching him from the dining table.

A little later I’m sitting out under the stars doing some fresh air thinking. Polishing off my fourth large bottle of Peroni. I watch a plane go past overhead. I imagine an American guy looking down and going, there isn’t much down there. We must be going over Africa or something.

My legs starting itching. So I scratch them. And I remembered earlier. When I had to empty out the waste water pipe. It had been festering for weeks. You have to empty it into a special little grill. You see signs for them as you are driving about. Mostly you miss the turnings. But anyway, we did eventually spot one in enough time to veer sharply from the road. I rolled up my sleeves and took a deep breath. The stuff stunk as it came out. It was late afternoon so I’d been bitten to buggery by mozzies.

The next night, short of options, we hit up the campsite restaurant. Couples of all ages except below fifty sit and whisper disparaging words at one another to break the silence. You leave the restaurant with this obsessive paranoia.

There is the Italian waiter that only talks to tipping nationalities. He showed us no interest when he realised my girlfriend was a fellow Italian. When he turned his back I did that thing where you raise a fist rigidly into the air, and slap the palm of the other hand between your biceps and inside elbow. Cocksucker. He may well have heard the slap of skin. But it doesn’t matter. His Pasta al Pesto was too salty.

There is one good thing about camper vanning. That vehicle rule about unbolting yourself and moving freely from front seat to seat is null and void. My girlfriend happily throws herself around – dishing out food, sticking the dummy in the little one – as I’m negotiating a lorry takeover at 98kph on a wet autostrada. Probably for the best. Like turbulence on a plane, you don’t notice how bad it is when you’re standing.

I said I wouldn’t go on about the food. But I ate the best tomatoes ever in a bar in that small mediaeval town with two world famous ice cream shops. ‘Grown on an allotment,’ the Barista told me. They had a kilo of salt on them which helped.

And there’s a relevance to this bit. There was a reason I had opted for tomatoes and not my usual Mediterranean intake of cured meats and Montepulciano. And this reason was my big toe. Which had become so painful that I spent two hours sitting on the incline of Piazza Del Campo in Siena, while the family explored. Some Asian tourists took my picture.

Turns out I’d contracted gout. At least that’s what everyman and his canine prescribed to me. Even the doctor. Although I didn’t actually see him myself because it cost fifty euros, so I sent my girlfriend in with a picture of my swollen big toe. Word somehow gets back to the in laws. It always does. So that night I receive a call from my girlfriend’s Grandfather. As ever, he was full of advice.

The almond in my cantucci.

We embarked on the long journey back to Liguria. Back to the in-laws. Me trying not to press too hard on the pedals to aggravate the condition.

Keith Lewis is a Brighton-based copywriter.

Copywriting: is inkhorning making your business sound stuffy?
In a scramble for diversity, are corporates missing the point?