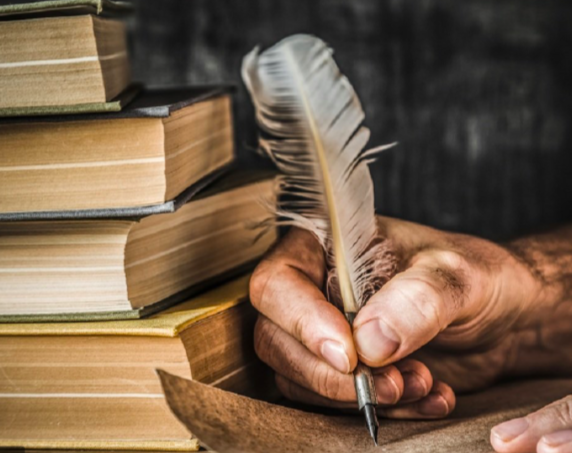 Inkhorning loses many companies credibility with their clients. But you might not even be aware that you are guilty of it…

The term comes from back in the day. The day when scholars, in a mad dash to differentiate themselves from the common folk, borrowed words from Latin to make themselves sound clever.

Many of these words – like illecebrous (enticing), fatigate (tire) and exsufflicate (frivolous) – never quite stood the test of time. (Although evidence of the latter can still be found in Shakespeare’s Othello.)

Put simply, inkhorning is the antithesis of plain English.

Are you guilty of inkhorning?

Today, some firms (even whole industries) are blissfully unaware that they are carrying on a modern-day form of inkhorning.

But far from intimidating people, you are out to engage them. And to do that you will need to use plain English.

Yet many companies, especially those that operate in more complex fields such as financial services, find this difficult. In fact, most people have a tendency for to revert to unnecessarily convoluted language when writing something down – leaning towards a colder, more academic writing style that rarely reflects who they are. Plus, using plain English isn’t simply about the words you use. It is also about the length and style of your sentences.

1. Where both project scale and longevity exist, we seek to add value by engineering underpinning technical interventions and overall efficiency alterations to enable your client’s software engagements to be realised ahead of schedule and predetermined budgetary constraints.

2. We help you manage software development projects more efficiently. This way, you deliver to your clients early and within budget.

Which example was easier to read?

Now ask yourself – did it lose any of its meaning? No. Granted, some copy has been cut. But it lost nothing of its message – which was drowning in sea of sweepingly generalised marketing profanities.

But it did gain clarity and flow.The reader is not forced to backtrack, or mull over a long string of words to work out the point of the sentence.

Making people think is good. But get them thinking about the benefits of what you do, or your profound insight, rather than deciphering what it is you are actually trying to say.

And it helps to keep the number of messages in a single sentence to one.

You may think that the above example is an exaggeration. But it was a real life example. In reality, many people that aren’t used to writing daily just don’t realise they are doing it.

Using lengthy words to say something that can be said in simple, clear language has the cumulative effect of sounding exclusive. Try hard. Pretentious. And I’m certain those things aren’t in your brand guidelines.

Add this to the fact that companies have to battle with internal terminology, and there you have modern-day inkhorning.

But your audience is used to technical language, right?

You are about to tell me that you are writing for high-end professionals: CEOs, senior managers, well-heeled bods that spend their lunches hobnobbing in swanky French restaurants. People that read The Economist.

And guess what. This makes it even more important to avoid inkhorning. These people are as busy as you are. Forcing them to digest wordy, convoluted sentences means they won’t tolerate you for long.

Consider the two examples above again. Was the second one less professional?

Far from it. In fact, the sentence was much easier to read. And remember that most of us these days read content on our mobile devices – on the way home, or during other tasks such as watching TV. So like it or not, you don’t have long to grab their attention.

Still sceptical? Go and pick up a copy of The Economist. Then tell me how many times you read sentences like the first example above.

The answer is never. George Orwell said “Never use a long word where a short one will do.” And you’ll find that quote on the first page of The Economist’s Style Guide. (I’d also draw your attention to his reference to jargon.)

Using plain English does not mean dumbing it down

None of this is to say that you should dumb down your writing. On the contrary, there is a place for technical words (irrespective of length). Good communication puts clarity first, so be sure to choose the right word to express what you mean. Plus, you might need certain terms to help with SEO.

The point here is that convoluted language is the issue. Far from making you or your company sound intelligent, it alienates audiences. It turns them off, no matter how high up the income chain a potential reader might be.

Using plain English is not so that dumb people will be able to understand better either. It is so that your sentences aren’t harder to digest than a fried fillet mignon.

Anyhow, I’m somewhat fatigated, but in the event that you deemed his article sufficiently illecebrious, then I would very much appreciate your exsufflication in distributing the aforementioned text as you deem appropriate.

In other words, thanks for reading.

The fuddy-duddy versus the copywriter
Travel Feature: Tuscany in a Camper.